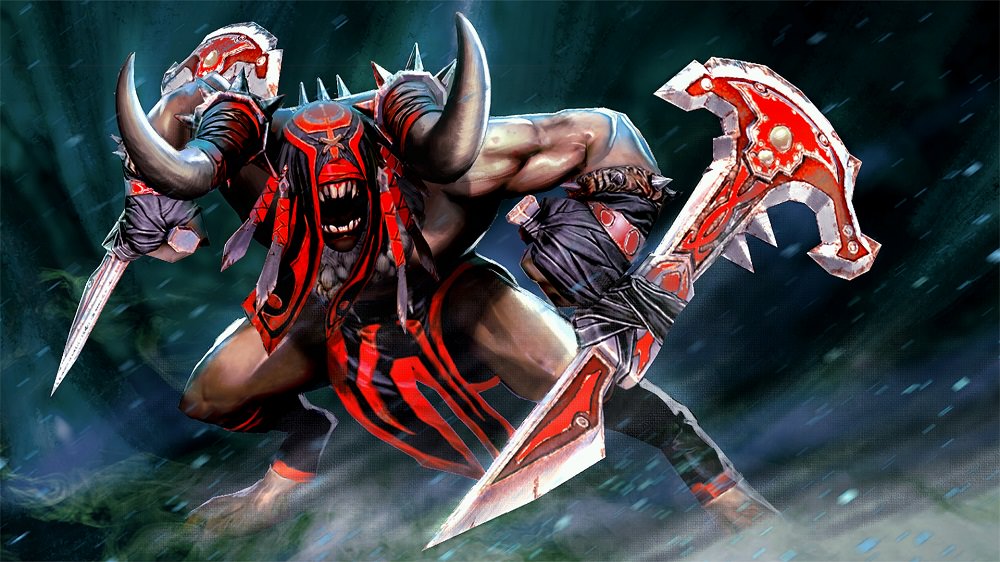 Dota works in mysterious ways. Certain hero can go unnoticed by the professional teams for over a year, get talent buffs and suddenly become a viable pick, with half the players opting for the unchanged talents. Bloodseeker has always been a great pick in lower level games, dominating the sub 3k pubs, but recent trends show that the hero is gaining momentum even at the highest levels of play.

Bloodseeker’s resurgence was expected after the hero received the level 10 talent buff in 7.16. Extra eight armor on a hero that has 24 starting agility and 3 agility growth per level makes the hero extremely tanky against physical damage. Even without items, the hero already has 10 base armor and putting it up to 18 can seem a little bit unfair, especially given how the hero also has respectable starting strength and strength gain.

Interestingly, currents stats for China Supermajor show that the majority of Bloodseeker players at the tournament have opted to get extra 25 attack speed at level 10. It looks almost as if players have decided to try the hero out, seeing how good the new talent is, and then realised that the hero is actually quite decent without the said talent.

Success in the current meta is very dependent on the laning stage. Snowballing out of control is possible and early map control not only means gold from towers and more room for maneuvers, but also easier access to bounty runes.

Bloodseeker is pretty strong in lane. He greatly benefits from 2-1-2 lane setups, since it generally involves more harass on several enemy heroes and he also scales very well into the late game, not necessarily as a right-clicker, but as a 40% damage amp for a hero he was creating space for throughout the early and mid game.

Bloodseeker itemization is still up for a debate. Hero was built in several different ways in the games games he was played in. There were first major item Shadow Blades, Sange and Yashas, Blade Mails and old school Radiances. There was even an Eul’s build.

It means one of two things: either the hero is extremely flexible or even professional players still haven’t quite figured out what the most efficient way to itemize Bloodseeker is. The objective truth probably involves a little bit of both.

Bloodseeker needs some actual HP, otherwise he simply melts to enemy magic damage, even more so under the effects of Bloodrage. While he is quite resilient to physical auto-attacks, at level 10 without items he only has roughly 1100 HP, making him a prime target for nukes.

Covering up for this weakness involves either building Strength and HP items or going for Blade Mail, to disincentivize the enemy nukers from unloading on you. Early BKB is also an option, however it should generally be built after one or two DPS items, otherwise it is mostly wasted.

The build should also vary depending on whether Bloodseeker is the main carry of the team or a position two core. If you have a late-game hard carry on the same team as Bloodseeker, going for tempo items is probably preferable. You create space for your Luna, Gyrocopter or something along those lines, buff them in the late game and then pick off wounded fleeing targets.

If, however, Bloodseeker is played in the first position and team mostly relies on him as the source of damage, he has to be built with this late game in mind. Farming and fighting hybrids, such as Maelstrom or Radiance, become quite important to maintain competitive net worth.

In this scenario teamfight participation at the earlier stages of the game should be limited to smaller skirmishes: without going for some early survivability Bloodseeker can’t teamfight 5v5 too well, or has to be played almost perfectly, waiting out most stuns and nukes.

Bloodseeker’s performance at the Supermajor showed that the hero is definitely worth exploring further. He was picked in different lineups and with different positions in mind.

The only two games where the hero lost were when he wasn’t complemented with a late-game core, so that should be kept in mind: Bloodseeker is probably at his best when playing more of a support role in the later stages of the game.

The only game where Bloodseeker won as a true position one was when Optic Gaming supported him with a safelane Venomancer pick and allowed him to completely spiral out of control by the 15-minute mark. Constant harass on the side lanes ensured CCnC dominance in the mid lane, resulting in an easy victory for the NA squad.

Going forward it is very likely teams are going to use Bloodseeker as a position two most of the time and that is something to keep in mind for your pub games as well. So far at the Supermajor Bloodseeker won 4 out of 4 games as position two, creating space and setting the tempo for the first 20 minutes of the game.

As a position once main carry he only won 1 out of 3 games, frequently running out of steam by the 30-35 minute mark, allowing the enemy to make a decisive and frequently rapid comeback. bloodseeker or spectre, who is bigger pub cancer

and talent from 25%lifesteal change to 30 % status reg Bloodcyka ofc, spectre needs too much farm to comes online, if you let it, kinda your fault, but this guy can snowball as soon as he gets ultimate and get 2-3 pickoffs. "Why are you going BS mid?"
Been getting asked this question since 2015... Because he's insanely strong there that's why Gotta agree with my main-man Herby, he's in a good place right now. I'd like to suggest that, in these hero spotilights, there should ideally be a link to the hero in the first paragraph and/or the title. Feels so wasteful to have to go to the serach bar, type the hero name, select it from the game results just to get to the hero page as I'm reading the article.

Otherwise, keep up the good work, love the articles. Dang out almost a year.. last year's major he was big time player as the crazy cool down talent and hp which really supplement him as snowballing hero with octarine and radiance being built... Now with the changes I think his back to a good spot I noticed that most of the heroes will only get popular in professional scene once picked by TNC. The spec pick by Raven before and PL pick by Kuku, SF by Armel and ET by Tims