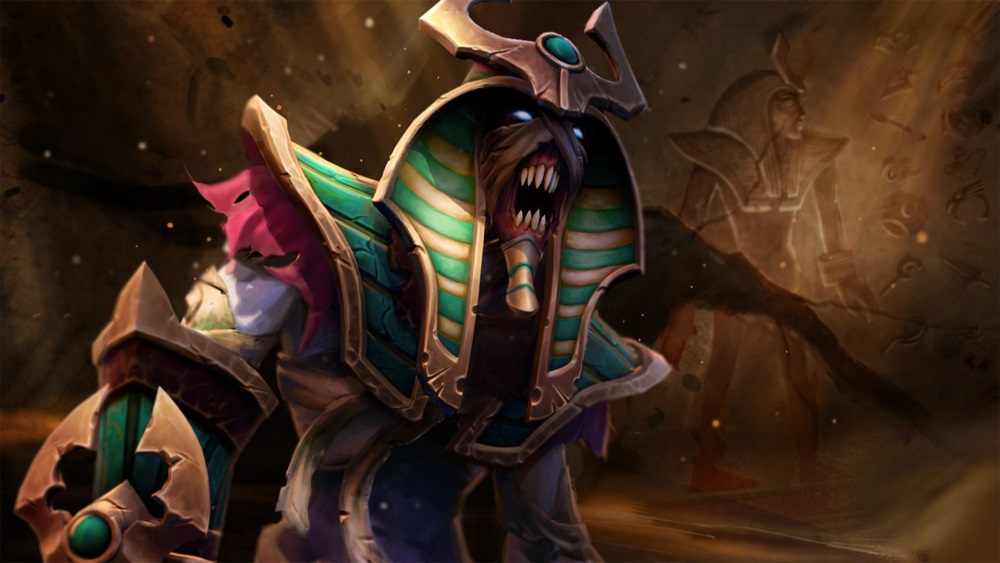 Core Undying is something that has been on my mind for a very long time. The big bad zombie man is fun to play and feels like he could snowball out of his incredibly strong laning stage. The recent changes to his Aghanim’s Shard (spawning zombies on attack in ultimate form) and a level 10 talent change have made players curious about his viability. I was challenged to head into the trenches and investigate whether core Undying is worth playing or just another way to light your MMR on fire.

Why would it work?

The wave of hype for a core Undying seems to stem from two main things. The first, a fairly practical reason, Echo Sabre is incredibly good for strength cores that need mana regeneration and the ability to stick on a target. On paper, Echo Sabre definitely fits the idea well and when combined with Flesh Golem can be incredibly powerful. The second reason everyone seems to want core Undying to work is essentially, ZOMBIES! There’s no denying that watching a horde of zombies tear your enemies apart is incredibly satisfying. Especially when you are a 10-story monster, punching poor supports into the dirt.

The real reason that core Undying has some less-than-decayed legs to stand on is a change that happened back in patch 7.29. To try and boost Undying’s ability to farm, Decay was changed to do double damage to creeps. This when combined with the level 10 talent (+55 Decay damage) lets the hero one-hit ranged creeps. It also makes two Decays clear an entire creep wave and take stacks of neutral creeps faster.

How to build Core Undying

Looking at the several pro players who have experimented with the hero in a core role there doesn’t seem to be any consistency. Some players opt for an aggressive style with Phase Boots, Echo Sabre, Aghanim’s Scepter, and Black King Bar. Others choose the more supportive role with Guardian Greaves and Holy Locket. After watching some replays and playing a few games with different builds there are a couple of clear points that stand out. Aggressive Undying is fun but also very hard to pull off in an uncoordinated pub. Even with the Decay changes, the Hero doesn’t farm particularly well. It also doesn’t build into many traditional carry items effectively and with abysmal armor and attack speed values, it is very hard to farm and fight without tons of items.

Ultimately, the more supportive healing build felt much more reliable and intuitive to play. Holy Locket is an incredible item and being able to keep yourself and your allies sustained through fights is easy with such a tanky hero.

The stats seem to tell the story when it comes to core Undying. In 7K+ MMR pubs, the hero has a 40% win rate in the offlane and is around those numbers in the other cores roles in a much smaller sample size. Meanwhile, the hero has a 56%+ win rate in the traditional hard support role. Undying simply cannot compete with any traditional carry when it comes to farming speed or damage output to towers and heroes in fights. The hero also needs to invest everything in its arsenal to take a team fight making rotations as a mid or offlaners mediocre and risky. The best build for Undying is as a tanky and annoying healer. This is a role that is entirely possible in the hard support position and is even more viable thanks to Undying’s much better farming speed since patch 7.29.

Is Undying core the new meta or just a YouTube video meme? Unfortunately for zombie lovers out there, playing Undying as a core is quite lackluster in a regular pub environment. It’s possible we will see some super-secret technology in a professional, coordinated environment but it’s hard to imagine pulling anything like that off in a regular game. Finally, we must ask the question: is Undying a good hero? Yes, but mostly as a hard support just like he always has been. I think a 4 supporting 1 type of play style with a 1 undying would be really fun to watch in a pro match.

Well, after OG's IO, you can't really deny the carry potential of anyone, even Techies or CM Tried it on smurf account and i won 8/8. The thing is it has much more impact as pos 3 then you think. It is most annoying with echo sabre and lvl10 talent extra damage on decay. It allows you to 2shot creepwaves and farm very effectively ancient and neutral stacks with tombstone. Very good hero will be nerfed soon probably Bro you've been much better then when you start months ago but please learn more how to write the blog from Kawaii. When we read blog from dotabuff we expect things like what's the winning rate for Echo Sabre Undying in certain bracket, or the disadvantage of healer Undying versus AA, or analysis on when's Undying's power spike fall off. You can speak out from your experience that's fine (anyone that discounts the experience just because you're not Immortal top 100 are fooling themselves) but when it comes from our favourite site to see dota-related stats we expect to see data to accompany your experience and opinion as well. Cheers for the write-up! Got stomped yesterday by an undying who barely survived laning phase, the mid game potential makes him strong from lane to mid game to now strong lategame, he has potential to play all roles except 4 maybe Undying whooped my safelane yesterday (I was in the offlane)

He's looking pretty OP if you got a weak lane with some weak players.

I'll have to take a look into him tonight when I get on. Its garbadge compared to other offlane heroes, Pos 5 undying is the only & best way to play the hero. DOTA has endless possibilities have you seen in PRO game series KOTL was in Position 1 and zero deaths at the end of the game its crazy! that's why UNDYING has a great window for CORE hero it emergencies in PUB scene sure will be in upcoming TI you'll never know!. please never support me with this shit ty