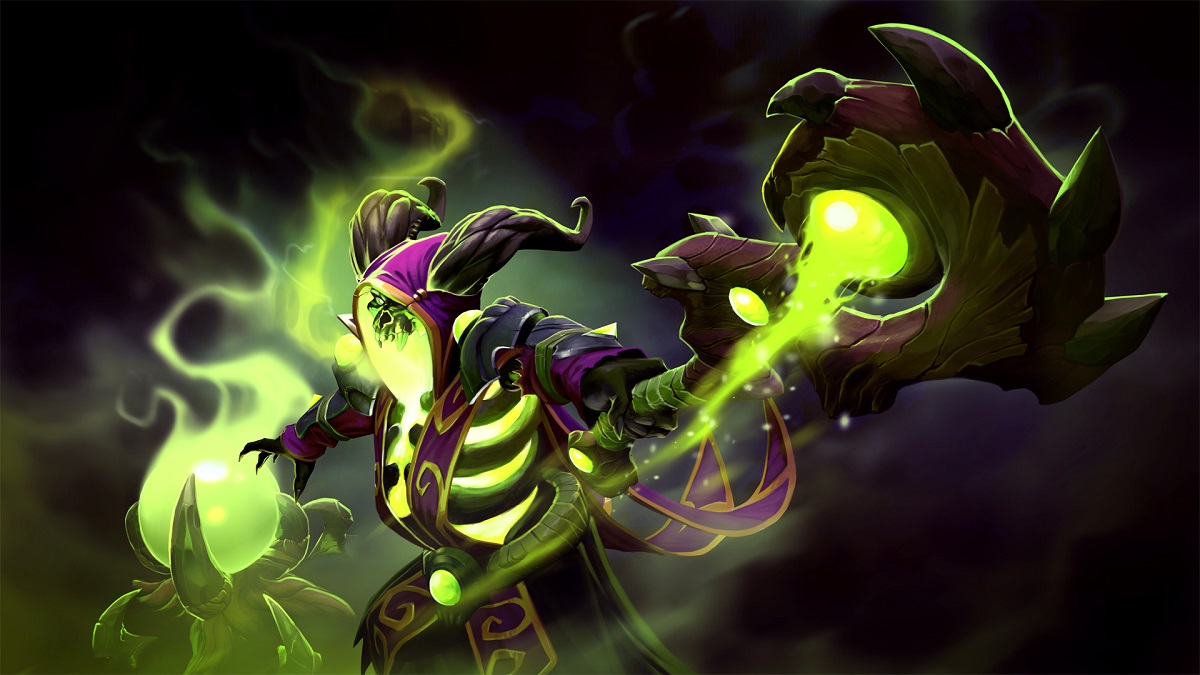 Pugna is undeniably one of the strongest and most annoying position five supports in the professional scene right now. He boasts a 70%+ win rate in the Major and is in the top three most contested heroes. Does it mean the hero can be as successful in pubs, or is Pugna too coordination-reliant to work in a chaotic environment?

This isn’t the first time Pugna is played as a support, but it is the first time it is this ubiquitous. Previously, the reason Pugna was considered as a non-core hero was because he could always pull off pulls, since Decrepify didn’t allow the enemy to interfere with neutral creeps, something that can and should still be utilized. He also had decent, if a bit costly, heal and provided the team with some reliable push.

Current Pugna is not about push, at least not the way the hero was used in the Major. Support Pugnas typically go 2-1-0-0 by level three and then max out Nether Ward by level eight. Sometimes Decrepify is skipped altogether: it is a niche ability that doesn’t give you much in some matchups.

The damage manipulation from Nether Ward, occasional saves with Decrepify and Life Drain heals make for a fairly potent damage and save support. The hero doesn’t have much crowd control and that is his biggest weakness, but with good positioning and smart itemization, you can turn around fights in a very unexpected manner.

So how does one make Pugna work? The hero is going to be quite farm starved, especially compared to his core counterpart, so we have to make every gold piece count.

Tranquil Boots is probably the non-negotiable part of this build. You need this extra regen to be able to sustain your own heals. Pugna is also naturally fast and can be out of reach of the opponent for a while simply through having superior movement speed.

Most pro players generally opt for Glimmer Cape after. It is now an iconic Dota 2 save item and between Nether Ward aura and Glimmer Cape magic damage reduction it can make even the strongest nukes look irrelevant.

Some later, quality of life purchases include Aether Lens, because there is no such thing as too much cast range. You could also potentially go for Boots of Bearing upgrade, since Tranquils are built already and the Drum aura can be very useful.

Finally, going for Wraith Pact is not something a lot of pro players do, but something that could work very well in pubs. Pubs are naturally slower, so a rather expensive support item can be within reach for a support. Between Nether Ward, Glimmer Cape and Wraith Pact Totem, you can get a ridiculous amount of damage mitigation, making your own heals that more potent.

Remember: heals scale incredibly well with any source of damage prevention, be it simple Armor and Magic Resistance, or some more unique sources of damage manipulation.

With a 70%+ win rate in the Major it might look like Pugna is a surefire way to victory right now, but while it is definitely a good, viable hero, he is not omnipotent. The lack of any form of disable has been mentioned already, but there are other weaknesses the hero has.

The second biggest one is probably Decrepify. It is an amazing ability that can sometimes do more harm than good. The fact that it prevents any sort of auto-attack interaction with the target can be a deciding factor in a fight, but it definitely works both ways. There is nothing sadder than your teammate pressing Satanic just as you attempt to save him with Decrepify. Experienced Pugna players will generally get a feel for it, but it will certainly take time.

Pugna also does very little once the enemy gets BKBs. Nether Ward stops working, both the damage and damage mitigation aspects of it. Nether Blast stops working. Decrepify becomes less relevant and the only thing Pugna can do at this point is provide heals through Life Drain.

It isn’t nothing, but a lot of other popular supports in the current meta have a very straightforward and considerably more effective way of dealing with a BKB: they prevent its usage with their crowd control abilities. Pugna, as stated previously, lacks in this department.

Finally, Pugna can be extremely squishy and his high movement speed doesn’t work well against enemies with natural gap closers. It is a hero with a very low Agility gain, somewhat low Strength gain and that means high susceptibility to physical damage come midgame. Pugna can and will dies over the duration of one stun, if he is found. Keep that in mind when trying to play the hero. At least in the bottom lairs where I dwell, the Pugna decrepify saves team mates and enemy heroes at the same rate... It is like Chronosphere, you can easily mess up your team with the ability. All of a sudden some enemy hero doesn't die and gets out a team fight ult and enemy cores have time to get at the back lines and the whole thing collapses hard... Seen this happen way too many times. BLOW JOBSON - this is exactly what your nickname says about you pugna is not fun, i dont like pugna now.
cause, so small, too easy to kill.
all int hero or mage hero, is too fragile